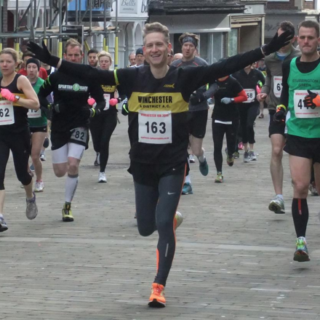 There were lots of WADAC successes in the final rankings from the 2015/16 season of the Hampshire Road Race League and the awards were presented after the Gosport Half Marathon (and collected by a patient few).

Many team trophies and individual awards were given to WADAC runners at the (low key) presentation following the Gosport Half Marathon. Many thanks to the patient ladies that helped me pick them up!

The team awards we received were:

These were the five trophies that can be seen in the picture.

So a huge well done to those ladies.

Mugs have since been made available that commemorate all 78 of the ladies individual league places and the top 100 individuals from the mens' league. To obtain a placing in the individual league a runner just has to compete in 7 or more of the 12 races in the season.

David Walker and Saul Duck will also receive T-shirts to acknowledge their commitment in running all twelve of the races in the season (once someone gets around to making them!)